What Can Surgical Eye Care Do for You? 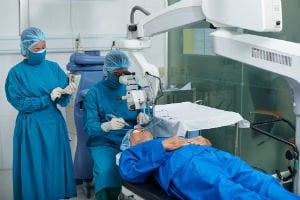 Surgical eye care is an ever-evolving field of medicine with enormous potential to restore vision loss, improve eye health, and enhance the quality of life for patients. When people think about laser eye surgery, they may automatically think of procedures like LASIK (Laser-Assisted In Situ Keratomileusis – commonly referred to as laser eye surgery or laser vision correction), which can help correct milder vision problems like nearsightedness.

But thanks to on-going medical breakthroughs, laser eye surgery has enormous potential to safely and effectively treat more serious and debilitating vision problems including cataracts and glaucoma.

The human eye has a natural lens that helps us to see by bending (refracting) light as it enters the eye and focusing it on our retina. Cataracts cause these lenses to become cloudy, scattering light rather than focusing it the way they’re supposed to. The early signs of cataracts are blurred, hazy, less colorful vision, double vision, and heightened sensitivity to light. Having cataracts can make you feel like you’re seeing the world through a fogged or grimy window. Anybody can develop them, but seniors, those with a family history of the disease, diabetes, or who have suffered previous injuries to the eye are at increased risk.

Milder cases of cataracts can be treated with prescription glasses. More severe cases require surgery in which the eye’s affected natural lens is removed and replaced by an artificial intraocular lens (IOL). Traditionally, this procedure involved cutting the cornea with a scalpel and inserting a small probe that destroys the eye’s natural lens via ultrasound waves. This process is known as phacoemulsification. Next, the intraocular lens is inserted, leaving behind an incision small enough that it rarely requires sutures. This outpatient procedure is normally completed in about twenty minutes, and recovery is very fast.

Laser-assisted cataract surgery has the same outcome and similar recovery times, but is less invasive. Instead of making an incision in the eye and inserting a probe, a surgeon creates a 3-D map of your eye called an optical coherence tomography (OCT) and then uses a femtosecond laser to break up the cataract. This allows your surgeon to remove the natural lens and replace it with the intraocular lens with minimal disruption of the surrounding tissue.

Some research now suggests that laser-assisted cataract surgery may be safer than the traditional variety. Besides carrying a lower risk of damage to the eye than a manual procedure, laser surgery also involves less use of ultrasound, which can cause some undesirable side effects including delayed recovery time and clouding of the cornea. It also allows for more precise standardization of surgery, which means a lower risk of the intraocular lens shifting over time and needing to be repositioned.

Glaucoma is a progressive condition in which fluid build-up in the front of the eye leads to increased intraocular pressure, causing irreversible damage to the optic nerve. It afflicts some three million people in the United States alone and is the second leading cause of permanent blindness worldwide.

There are two main types of glaucoma: Primary Open-Angle Glaucoma (POAC) and Angle-Closure Glaucoma (ACG). In primary open-angle glaucoma, the most common form of the disease, the eye can’t drain itself of fluid the way it’s supposed to. As a result, eye pressure builds over time. Because the disease progression is so gradual, most sufferers don’t notice any initial symptoms. They only realize something is wrong after considerable vision loss has already occurred.

Angle-closure glaucoma occurs when a person’s iris is unusually close to their eye’s drainage angle, which can cause the drainage to become completely blocked. This can lead to a sudden, rapid build-up of eye pressure, resulting in an acute attack, which is considered a medical emergency.

Currently, there’s no way of reversing damage to the optic nerve or restoring vision loss caused by glaucoma. But if the disease is diagnosed early enough, there are ways of mitigating potential future vision loss. Many patients are prescribed medicated drops to lower intraocular pressure, but laser-assisted surgery has emerged as another effective treatment. Argon Laser Trabeculoplasty (ALT) works by beaming open the eye’s fluid channels to promote drainage in primary open-angle glaucoma sufferers. Laser Peripheral Iridotomy (LPI) involves making a tiny hole in the iris of angle-closure glaucoma patients to help it fall back away from the drainage channel. These procedures can have vital therapeutic value for patients who’ve had little success with pressure-lowering drops.

Please note that this article is for informational purposes only and should not be treated as a substitute for proper medical care. For more information or to schedule an eye exam, please contact one of the professionals at Florida Eye Specialists and Cataract Institute.